Maps tell stories. NASA satellite images of the color of the ocean can also tell a story. We will discuss a geo-imaging pipeline for processing a time series of NASA satellite images, hosting on Mapbox, and using D3.js and Plot.ly to interactively visualize data from our oceans over time.

ePi Rational built an imaging & mapping pipeline for Oceaneos.org that processed NASA satellite images to visualize trends in phytoplankton in the ocean. Oceaneos is studying Ocean Seeding. A simple idea: that adding nutrients to a depleted marine ecosystem will stimulate photosynthesis, causing plankton to grow, thus restoring the bottom of the marine food chain that fish require for growth.

We will discuss our geo-image pipeline for processing NASA GeoTiffs using GDAL and hosted at Mapbox.com, and other open source Javascript libraries for data visualization. We also utilized NumPy to compute basic statistics on the GeoTiffs. We will also discuss our data compression techniques for operating on floating point GeoTiff data, as well as image compression with WebP.

The implemented web page design is built on top of D3.js and a Plotly.js time series graph at the bottom of the map. When the user clicked on a particular date, the Mapbox map would also update to the chlorophyll levels time series for a time slice in the 13 year span. Plotly.js events are captured and routed to Mapbox GL JS, which then makes updates to the map with images from Mapbox.com.

For further scientific details on Ocean Seeding and phytoplankton, please see the blog post at Oceaneos.

One of the best places to study Earth is from space. NASA satellites continually orbit the globe, collecting information about Earth’s ocean, atmosphere, and land surfaces. Satellites can even monitor the activity of life forms, such as phytoplankton, from their remote vantage points. 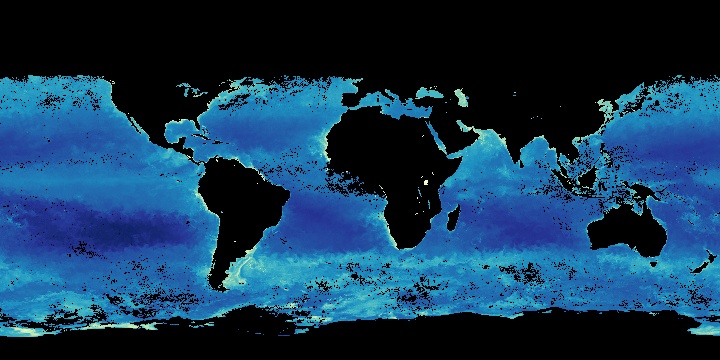